Recently an industry expert told me that the need for recall had been eliminated by the Portable People Meter.

On the surface this logic makes sense. With paper ratings dairies, we relied on listeners to remember a radio station and write down the frequency or call letters. If the radio station had great recall, it won! Now the PPM determines the station being listened to and keeps track of the data. No need for the listener to remember anything about the radio station, right?

If listeners don’t remember stuff about your radio station, there isn’t really a compelling reason for them to return, or to talk about your station with friends who might end up sampling.

Create a jukebox with no real personalities, zero promotional activity and no controversy — and watch your ratings suffer. Be forgettable, and that’s just what you’ll be.

With the fall season, it’s time to tune up your station to create the recall you need to be sampled and remembered.

Start with your personalities. — Does each member of your air staff work on their own brand? What are they doing to connect with potential fans?

If they’re personable, are they out a lot in the community? If they prefer to reach out via social networking on Facebook and Twitter, do they do it enough to engage mass numbers?

Do they do a real show every day with a roadmap of what they’re talking about, or are they just voice-tracking titles?

Challenge your personalities to come to you with fresh ideas for building their brand in your city.

Create a promotional calendar. — Smaller staffs have made it difficult to do more than just execute day-to-day to operations. You’re not alone in feeling as if there aren’t enough hours or bodies around to do the work.

Your job as a manager is to prioritize and there are few tasks more important than developing and sticking to a promotional plan.

Contesting, raising money for great causes, hosting exciting money-making events and properly acknowledging and celebrating holidays that make life special … all are vital to being memorable.

If you’re a rock station and you missed the major party holidays last year — St. Paddy’s, Cinco de Mayo, Mardi Gras, Halloween, Day After Thanksgiving and New Year’s — you’re not positioned to be successful in terms of making yourself more than just a forgettable jukebox.

Market your station! — Stop whining about having no marketing budget. When nobody has a marketing budget, guess who wins? The radio station that has someone smart enough to build significant trade relationships with TV stations, Web sites, newspapers, direct mail users and retail stores.

While trade with media companies may be obvious, it could be that you’re confused about how direct mail users and retail stores can help.

For example, if the power company in your town is willing to include inserts in monthly bills they send, you have an opportunity to perhaps run a “WXXX Pays Your Power” contest advertised as a bill stuffer. In the case of a retail store, a pizza shop could put flyers on their boxes each night advertising your station to the thousands they serve.

Ask your general sales manager to help you start these discussions. In many cases, the GSM already has the contacts needed.

Staff up! — Yes, I know you’re not hiring anybody. I also know that it’s a rare station that has an actual plan for finding and then utilizing interns from colleges, trade schools and even high schools.

Once you recruit, do you have a written plan as what your staff will accomplish during their term? If you can’t figure out what to do with them, don’t bring them — but don’t complain about having a small staff.

To find out how you’re doing on the memorability scale, try this test: When people ask you where you work, see if they’re excited or curious about your answer. If all you get is a nod, you’re not working for a memorable radio station, you’re working at a utility that’s in need of energy.

The author is president of Lapidus Media. Contact him atmailto:[email protected]. Radio, Stick to Your Knitting 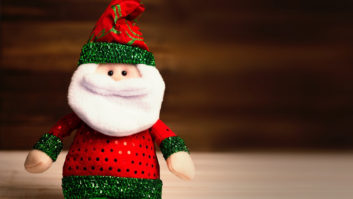