About the Potomac AM field intensity meter and Cris Alexander’s review (“PI 4100 Takes to the Field,” Jan. 1):

His thumbs-down for battery life is spot on. When doing AM directional antenna proofs, you do require more stamina than 5 hours of battery run time. Or the unit should have been equipped with a fast warm-start GPS receiver to permit battery conservation by powering the unit down between measurements without suffering the reacquisition time penalty of the present unit. Why choose to provide NiMH batteries, which have poor shelf life due to rapid self discharge rate, when lithium ion would have provided twice the run time and almost no self discharge?

His criticism of no built-in mapping or routing is inappropriate as the GPS is meant only to document the measurement point. A built-in mapping database would require frequent database updates and would risk the entire unit becoming obsolete in a few years; GPS receivers are evolving rapidly. One would hope that a $15,000 investment would last at least as long as a FIM-41.

I’ve always had to use two GPS receivers when out in the field with a FIM-41, one unit for map navigation and the other set to the center of the tower array to provide radial line and distance indication for the actual measurement. At least with the PI 4100 it would eliminate the juggling of two GPS units.

It is a pity a $15k instrument doesn’t come with a decent color display when a $50 cell phone does. An OLED display probably would not draw a lot more power than a backlit monochrome LCD but it would have superior cold-weather performance characteristics.

And why the step backwards with the molded-in loop antenna that cannot be folded to make for a safe, compact package for storage and shipping? You require a screw driver to disassemble it from the main case.

Why provide only a USB interface when a wireless Bluetooth or Wi-Fi link would allow one to download the data into a notebook computer instantly for evaluation in the field? It would also provide an enhanced means of programming the PI 4100 without resorting to the limited keys on the unit itself.

Finally, and this was my gripe with the original Tektronix 2710 spectrum analyzer, why saddle an expensive instrument with a cheesy membrane keyboard? Tektronix was quick to release an updated version after much criticism, model 2712 with real keys.

The author is an occasional contributor to Radio World; opinions are his own. 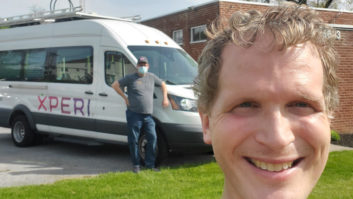