Fig. 1: Oh no! Permanent marker on the station white board? But before you replace the board … I bet you’d agree that one of the most enjoyable things about being a broadcast engineer is your problem-solving ability. You’re the one the station staff turns to for fixing the studio equipment or diagnosing a laptop or printer failure. You seem to have all the answers … or you’ll find them.

Here’s a tip along those lines. Fig. 1 shows a typical white board. It could be located in your shop, but more likely it’s in your station conference room.

Fig. 2: … carefully trace over the permanent marker ink with a white board dry marker … A lost cause? No.

You can buy a liquid cleaner to remove the permanent marker; but here’s a better idea, one that will also save you a trip to the office supply store

Then take a cloth or the white board eraser to it, and, presto! As you can see in Fig. 3, the mark is gone.

You’ll look like a hero in the eyes of management, saving them the cost of a white board.

Fig. 3: … wipe the board clean, and take a bow! You may not be at the station when the problem occurs, so pass on this trick to the office manager or administrative assistant. Show him or her it really does work and share your knowledge.

Thanks to my associate Wendell Lonergan for helping demonstrate this trick.

Nothing endears a customer to a company like keeping them informed after the sale.

We could all name a handful of companies that do this. The folks at Telos/Omnia/Axia would definitely be on the list.

Clark Novak puts together an informative e-newsletter that you should be getting, even if you’re not a customer. In a recent issue, Clark outlines the importance of setting optimum input levels on an Omnia processor — and it’s not done with steady-state tones.

With normal program audio, the Input Gain Master should be adjusted so that the input bargraph meters are hitting from about –15 to –12 dBFS on regular peaks. These are true peak-reading meters, so they will not read correctly on steady-state tones.

The Master Drive control on the Omnia 5EX, 6EX and 6EXi (located after the input bargraph meters) should be left at 0.0 dB if the reference 0VU level of the equipment feeding the Omnia is +4 dBu. This will provide optimum headroom throughout the Omnia.

Ed has a remarkable library of radio history — some 4,800 airchecks — all searchable at his Web site, www.manfrommars.com. Did you grow up listening to Greaseman, B. Mitchell Reed on KFWB, or Johnny Knox on WQAM? Get a taste of nostalgia from this site.

His prices for dubs are fair; give it a try and revel in the warm glow of vacuum-tube goodness.

Fig. 4: Moisture and cold temperatures wreak havoc at mountaintop sites. It may be spring, but some folks still have to deal with cold weather — especially atop mountains.

Here in New Hampshire, the deep freeze continues well into May some years.

Taken by Los Angeles Market Chief Eugene McEfee, the photo in Fig. 4 is from December. The site is on Heap’s Peak, where Entravision’s KLYY(FM) is located. Heap’s Peak is at an elevation just under 7,000 feet, and is about a couple hours’ drive from downtown Los Angeles. It’s high enough and close enough to the Pacific Ocean that the site receives storms with massive amounts of water content at temperature just below freezing.

These, of course, are conditions perfect for icing. The temperature rarely stays below freezing for longer than a few days, so the ice does not stay around long. But it is a repeatable condition.

Fig. 5: Mother Nature can pose an equal opportunity for broadcasters. The antenna in Fig. 4 is a PSI Broadcast Power-Tiller with heaters. It was a new antenna that was purchased from PSI just to avoid this problem. The antenna heaters were turned on the day before the storm, and their operation was confirmed by the current draw. Obviously, the heaters were ineffective, and Rick has been working with PSI on a solution.

A curious observation is that they have noticed no difference in the accumulation of ice on this antenna with heaters as compared to the unheated antenna they’d used for years.

The peak VSWR was 2.57:1 and they needed to reduce TPO from 18 kW to about 5 kW just to stay on the air. Talk about being at Mother Nature’s mercy!

Thanks, Rick, for sharing the situation, and for Eugene’s pictures.

Got a story to tell about how you’re dealing with Mother Nature? My e-mail address is below. Make sure your pictures are of the highest resolution!

John Bisset has worked as a chief engineer and contract engineer for 39 years. He was the SBE’s Educator of the Year for the year 2006. Reach him at[email protected]. Faxed submissions can be sent to (603) 472-4944. Watch Out! The “Phantom Power” Is Coming This Halloween Season 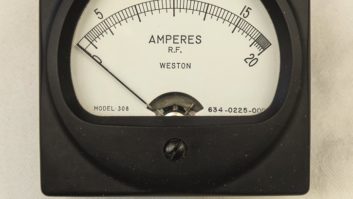 How Community Radio Is Helping India