Ron Rackley’s death has rocked radio engineers and others in the radio industry’s technology circles. Rackley passed away unexpectedly on Friday night. He was 66.

The veteran consulting engineer was the champion of AM radio and its revitalization efforts. He worked on high-power medium wave antennas systems around the world and served as a consultant to USA Digital Radio during the early stages of in-band on-channel (IBOC) digital testing in this country.

AM broadcast system design and optimization was Rackley’s passion, according to industry friends. He graduated from Clemson University with an electrical engineering degree and was a former radio station CE and antenna designer for Kintronic Labs Inc. In 1983 he co-founded du Treil-Rackley Consulting Engineers, with Bob du Treil, which later merged with A.D. Ring & Associates to form du Treil, Lundin and Rackley.

Rackley grew up in Greenville, S.C., and worked as a duty operator for several local AM radio stations while still in high school.

“I had plenty of time to read various engineering reports and study contour maps while on duty. Radio always seemed like magic to me. It seemed less like magic after I took mathematics in college,” Rackley told Radio World during an interview in 2006 acknowledging his NAB Engineering Achievement Award, which he shared that year with his friend Ben Dawson.

Rackley said, “I can’t recall a time when I wasn’t interested in radio.”

Touching tributes to Rackley appeared over the weekend, including one from his daughter, Elizabeth, posted to her father’s Facebook account: “My father passed away unexpectedly Friday night. Please pray for my family, and especially my mother. My dad was definitely the most intelligent person I have ever known.”

“He did work in his field of electrical engineering that only a handful of people in the world were capable of, and was renowned for it. I will remember my father as an incredibly wise and loving father, who always knew what was best and who loved and appreciated his family. I have annoyed so many people bragging about my dad, and I have no shame for it. He deserved every word of appreciation,” she wrote.

Rackley, who was at the NAB Show in Las Vegas early last week, told Radio World during an earlier interview that he was a “self-professed introvert uncomfortable speaking in front of crowds,” yet delivered countless speeches to radio engineers on how to troubleshoot and maintain AM antenna systems through the years.

“I’ll do it if I can help other engineers understand what AM is all about. Professionals are supposed to share information and to share knowledge,” he said.

[Read: Rackley on Synchronous AM Boosters]

Rackley was a regular at broadcast engineering conferences, friends say. David Layer, the NAB’s VP of advanced engineering, told us, “It was devastating news that Ron Rackley had passed. I am so glad I was able to see him last week at the NAB Show and of course now wish I had spent more time with him. Ron was one of the gentlest souls I’ve ever encountered, a true gentleman and scholar, his brilliance as an AM broadcast engineer was world-renowned. He will be greatly missed by me and I expect everyone who knew him.”

The broadcast engineering community flooded Rackley’s Facebook page with condolences. Veteran broadcast engineer Richard Rudman posted the following: “I had the great fortune to know this man and work with him on a research project. Ron was more than a brilliant radio engineer who I swear could visualize complex solutions as Smith Chart displays, a form of analyzing that require mere mortals to use expensive test equipment. Ron was wonderful teacher with a folksy down home style. He will be missed.”

Jeff Littlejohn, executive VP, engineering and systems integration of iHeartMedia posted his condolences: “One of the nicest, most intelligent and professional people I have ever met. The broadcast industry lost a giant.”

Art Sutton, president of Georgia-Carolina Radiocasting, told Radio World in an email: “I first became acquainted with Ron, like many did, when needing help with an AM signal matter. No one knew amplitude modulation better. In addition to just being a hell of a nice guy, he was a great broadcast historian. We shared many enjoyable communications about the history of this business we love and the prominent role radio broadcasting has played in the development of our great nation.”

Rackley lived with his wife, Dorothy, in Sarasota, Fla. The couple has four children. His family is currently planning a Celebration of Life service. 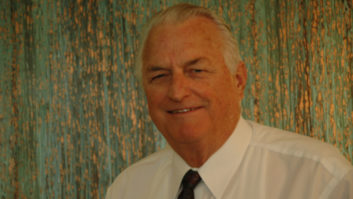