The award, for New Yorker of the Year, was being bestowed, he said, on a government bureaucrat “who never spent one day working at a broadcast station; who has never been closer to the news industry than when he had a paper route.” Those were some of the remarks made by O’Rielly — undoubtedly to laughs from the room full of broadcasters — during a luncheon with the NYSBA during its Broadcast Leadership and Hall Of Fame Luncheon on Oct. 17 in New York City.

“You should know that, when David [Donovan, president of NYSBA] called to congratulate me for being selected as New York Broadcasters New Yorker of the Year, I suggested he was way off base,” O’Rielly told the crowd. “In my mind, I stand before you as someone completely unworthy of this honor. Let’s face it: you are looking at a short, overweight, government bureaucrat … whose claim to FCC fame includes successfully allowing broadcast stations to close up shop,” (albeit, he said, as part of the much-lauded elimination of the FCC’s long-standing Main Studio Rule).

“[While] there are far more deserving individuals from this amazing state,” he said. “But…not being on the selection committee myself, I happily accept this award.”

O’Rielly, a native New Yorker from the western part of the state, said broadcasting provided a “wonderful foundation of fulsome life experiences” that have been enormously valuable throughout his professional career. He was born and raised in a small city on the Erie Canal just outside Buffalo, N.Y., which is home to hearty, hardworking individuals that — as he said in his confirmation hearing back in 2013 — “accept the hard winter weather and lack of sun as a badge of honor.” All across the State of New York, O’Rielly said, people are smart, gritty realists who tend to tell it as it is. “Throw into that mix some challenging weather from time to time, and you have the formula for some really unique individuals that tend to do well in our fairly complex society,” he said. 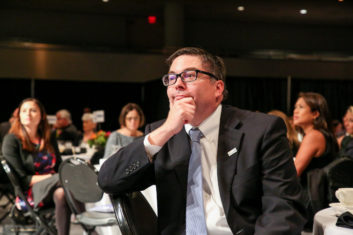 Local broadcasting was a key part of his early education, he said, as local news, sports coverage and children’s programming fed some of his earliest interests. During his six-year-long tenure at the commission, O’Rielly said he has attempted to distinguish himself as someone who listens attentively to the problems and issues facing broadcasters and tries to find workable solutions, from local ones pirate radio to broader ones like the seismic shift in the video marketplace.

“Part of my focus has been to reduce the overall regulatory burden on broadcasters, as is demanded by the FCC,” he said. “This means eliminating any and all unnecessary requirements that impinge on broadcasters’ ability to serve their local communities. Your government should not mandate obligations that impose undue costs and require inordinate time to comply when a regulation has far outlived its usefulness in the modern marketplace.”

O’Rielly told the organization that the good news for the broadcast industry is that there are important and vibrant opportunities ahead. “While the competitive marketplace may change around you and technology may continue to present challenges, you provide real value to the American public,” he said.

For local radio in particular, “your role in the community has never been more important, especially with the demise of so many newspapers.”

He touched on personal tragedy during the event by saying that a recent death in his family of his brother-in-law put a somber note on his appearance at the event.

But he closed by saying that this award would only serve to make him “work harder, smarter and longer to ensure that the American people are getting their money’s worth from the FCC.”

As president of the NYSBA, Donovan said that O’Rielly stands apart as one of the outstanding commissioners in the history of the FCC.  “He studies an issue in depth and then makes a principled decision,” Donovan said, saying O’Rielly has been a leader on a number of issues affecting New York broadcasters, including his championing of increased enforcement against illegal pirate radio operations.

Prior to being nominated by Pres. Barack Obama in 2013, O’Rielly served in key positions in the U.S. Senate, including as policy advisor in the Office of the Senate Republican Whip and as a professional staff member on the Committee on Energy and Commerce for the House.