This week there was a lot about Star Trek. Seems like the 50th anniversary of TOS (Star Trek geek language for “The Original Series”) and CBS’ new series have drummed up a lot of press. Everything from a paint job for the original Enterprise model at the Smithsonian to the inventors who create what we see on the TV series.

Set to Stun
No “stun” setting for this guy. Here’s a scientist who has been working on a phaser more like we’ve seen on Star Trek. Not quite there, but it’s interesting.

The Enterprise Gets a Paint Job
There are a few links within the following page. The original large model used for filming in the original series was overdue for a paint job and repairs. Here’s how they did it.

Romulans Go Invisible
We’d get a chuckle out of the Romulans making their ships invisible, but the idea was enough to take stealth technology one step further. Here is “light bending” to create invisibility. We’re still a long way from making something like a ship invisible, but it’s fun to see what scientists can do.

Transporting Today
Since this OTBP gravitated (pun) to Star Trek, here are a few links I’ve shown you in the past. If you have other nerdy Star Trek fans (like us), send them a link to this page so they can see how our old fantasy TV show is becoming reality. Here is a story about a transporter … though I think it’s a little more like a replicator.

“Computer”
Talking to a computer was once total fiction, but Siri and Google brought them into our reality with voice recognition. Here’s a story about a voice recognition system that could be a part of your future house. Not so sure you’ll have Majel Barrett-Roddenberry’s voice for your system though (like she did in the Treks).

Test Time
And just for fun, here’s a test of “real vs. Star Trek.” If you looked at all the above links, you have a head start.

And finally …
If you are a Star Trek fan, be sure to go to YouTube and type in “Star Trek Bloopers.” You’ll see everything from the original series to the most recent movies outtakes and gag reels. From the Archives: Fires, Your Station and You 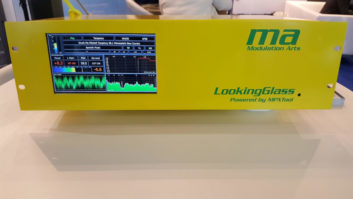 Best of Show Up Close: The LookingGlass FM Monitoring Appliance Live Broadcasting Is Being Catapulted Forward by Remote IP Codecs