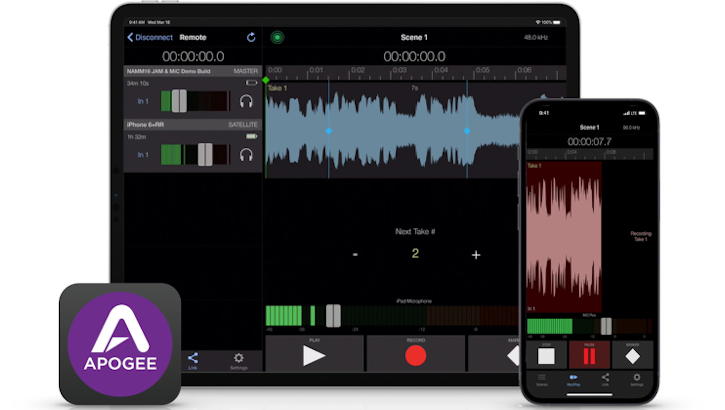 Apogee has updated its MetaRecorder iOS app with the release of V2.2. The audio recording app for iPhone and iPad offers linked recording, tagging and organizing of audio on up to four iOS devices.

New to this version is the ability for all Apogee products, including Symphony Desktop, to unlock MetaRecorder on iPhone, iPad and iPad Pro. Additionally the link feature that was ‘broken’ by iOS 14 has been fixed, and there have been additional ‘general bug fixes.’

Apogee MetaRecorder is a two-channel audio recording app for iPhone, iPad and iPod Touch with features to support a variety of workflows. Audio is recorded at up to 24-bit/96 kHz in WAV or CAF format. Users can connect an Apogee audio interface or Sennheiser ClipMic digital or MKE 2 digital lavalier mic for a professional quality input signal, and adjust hardware input gain and DSP (Sennheiser only) from MetaRecorder.

MetaRecorder features compatibility with Timecode Systems’ UltraSync BLUE module as an in-app purchase. When enabled, MetaRecorder receives timecode via Bluetooth and embeds it into the audio file metadata. This is intended to simplify synchronization of audio and video files in Final Cut Pro (or another NLE).

The app is available in the Apple app store with a free edition that allows in-app purchases to the full version ($4.99), full version with multidevice support ($14.99) and other upgrades.