He recently came across an interesting compound that can help you when you need to remove concrete or rock.

You drill holes in the concrete, then take Dexpan Expansive Demolition Grout, mix it with water and pour it into the holes. 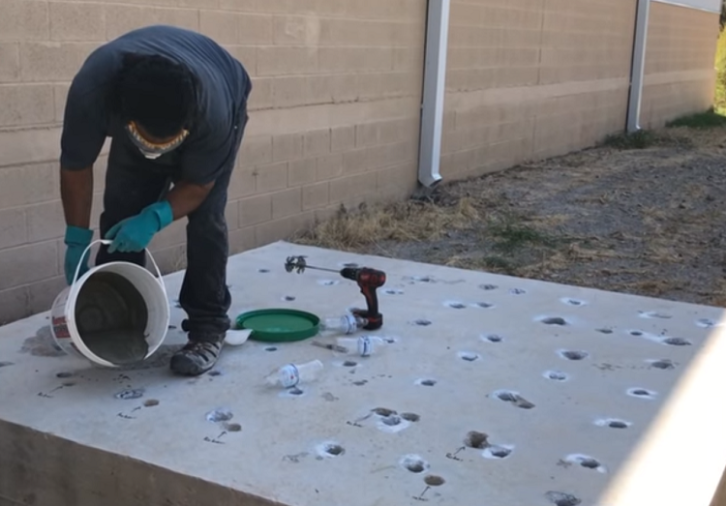 The chemical reaction with the water expands the compound, exerting 18,000 psi expansive strength into the drilled holes. The force breaks up rock or concrete slabs, even if rebar is present.

The process is amazing, watch the time-lapse video at dexpan.com to see the “after” photo.

For anyone who has demolished concrete with a jackhammer or even a sledge, you’ll be amazed at this efficient alternative method. A bucket of the compound is less than $50 and is available from Amazon or Home Depot. Enter “Dexpan” in the search block.

Wayne Eckert is with the Rural Florida Communications Cooperative. He spends a lot of “hands-on, in-the-field” time dealing with communications issues.

In the Oct. 28, 2020 issue we talked about asking your tower riggers to check for problems while they are the structure to change bulbs. As an example, we ran a picture of a cable that had pulled free from a liquid-tight electrical box.

Wayne says the photo revealed an installation problem waiting to cause a serious light/electric failure.

Looking closely, he believes both cables were installed improperly and that the connectors were sized incorrectly or were not intended for supporting flexible cable.

The cable on the side of the electric junction box was bending tightly under its own weight, which, after a while, will cause the jacket to crack and permit moisture to enter the cable, compromising the insulation of the conductors. Wayne said the stainless steel loom works like a Chinese finger trap: Stick a finger in each end, and when a child tries to pull them out, the loom tightens up holding the fingers in place. Great fun, unless you are the kid with the stuck fingers!

The connector works the same way. Pull the loom back, and push the cord up and into the connector, leaving enough slack to be spliced in the box. Then release the loom. It grips the cable evenly over the entire length, securing it tightly to the box.

The loom will also prevent the cable from forming a tight bend, eliminating the potential for insulation to crack.

To select the correct size, note that the cable outer diameter may be listed metrically, thus 3/8-inch equals .375 and 1/2-inch equals .500. Also consider the size of the knockout hole on the junction box.

Wayne cautions that dust-tight connectors are for dry, indoor use. Deluxe grips are liquid-tight for outdoor use but can also be used indoors.

We recently featured a photo of a tube tester on display at the California Historical Radio Society museum in Alameda. Commonly seen in drug stores back in the day, they were available for customers to check their vacuum tubes at no charge.

Dave Costanza, CBNT, works in the video facility of the Pennsylvania Senate. The picture reminded him of a similar but smaller tester that his father built from a kit in the early 1950s.

Shown in Fig. 3, this tester is in remarkable condition. Dave says one of these days he’ll “fire it up” and test a few tubes. Dave joins scores of other readers who thanked us for the memory.

Workbench readers may remember that Motorola two-way radios also had a lifetime warranty on the “PermaKay IF filter” used in the receivers.

Bob wonders, “Whose lifetime were we talking about? The part’s lifetime, or the company’s?”

John Bisset, CPBE, has spent over 50 years in broadcasting and is in his 31st year of Workbench. He handles western U.S. radio sales for the Telos Alliance and is a past recipient of the SBE’s Educator of the Year Award.