It’s not enough to have good parents these days. Being made by a name brand manufacturer only gets a new audio device in the studio door. Getting to stay is incumbent on performance.

A piece of equipment receives a legacy in one of two ways: either being featured on a highly successful project (think Cher and Auto-Tune) or through consistent predictable performance on an overwhelming body of work.

There is little question as to the audio heritage of the RE-20 and RE27N/D. Both have proven themselves as venerable workhorses in the broadcast and recording industries. From the studio mics in 50kW flame-throwers to kick drums, these remain staples of our industry. And with the release of the RE320, Electro-Voice adds to the lineage of this great line. But to take its rightful place inside the shock mount throne, the RE320 will have to speak for itself.

Out of the box

Technically, the box is a pressed-fit zippered ballistic nylon. Not a bag. But not a conventional box either. It is well constructed and more than ample protection for transporting this large mic.

Unzipping the box, the 320’s metallic black finish looks great. The shell design seems to have changed very little from the RE20 and RE27.

Another benefit of the unified profile is its interchangeability with the 309A, perhaps the largest shock mount ever manufactured. It can be a little tough to see around, but the RE320 is no pencil microphone.

My first session with the RE320 was a voice-over in the recording studio. I performed a side-by-side test between the RE-20 and RE320. The 320 is definitely brighter and around 5.7dB hotter than the RE-20 using my Focusrite ISA428. Being a dynamic mic, it is below the output of a modern condenser, especially when connected to a transformed microphone preamp like the Focusrite. Although more gain may be necessary, signal-to-noise is not a problem due to EV’s hum-bucking coil design. Even after engaging the second gain stage in the ISA428, this mic was quiet. In fact, it may even have less noise than the high-output condensers.

The bump in high end feels more consistent with the bright condensers that have flooded the market over the past few years. Yet this change is not enough to offend most RE-20 users and still feels very natural.

Let me throw in here, the low cut filter switch is not a low-cut filter switch! Somewhere along my career I stopped reading manuals (please don’t tell my children). As it turns out, E-V has put this switch to a more novel concept. The 320 has two tonal curves. One is used for general purpose, like voice. The Voice Contour is a fairly flat response to around 100Hz with a bump at the upper mid- to high frequencies. The Kick Drum Contour is tailored to extend the low end a bit. And it has a gentle notch around 200-400Hz. Perfect for boxy instruments or even voice in small booths.

Without a doubt, if you are not familiar with this line of mics, you’ll be amazed at the lack of proximity effect. And the RE320 continues that detail. An announcer could look hard left and right without any discernable drop in low end. You can back away without sounding like you’re off-mic. Remember when we used to reach for a cart in the rack behind us? Not that it happens anymore, but there is still plenty of movement in live broadcasting. Watch ESPN’s simulcast of Mike & Mike in the Morning for an example of just how much movement this mic can negate.

There simply isn’t another microphone design with this tonal consistency.

Frequency response based on switch setting. Click to enlarge.

Because of this feature, I thought it would be interesting to test the mic against instruments that exhibit their own proximity effect (similar to kick drum). I started with a Yamaha Conservatory Grand Piano. By conventional thinking, this is a bit of a stretch for this mic. But in a scenario where you were forced to track with the lid closed and the mic very close to the sounding board, the RE320 has an ability the conventionals don’t. The RE320 stayed far more focused on sonic energy under 1kHz.

I also found the 320 to be very nice on snare drum and toms. The consistency of bottom end from the 320 makes for a very easy mixdown. While the solo track felt like it lacked sizzle, the track cut through the mix quite well.

Click the icon to hear an audio test of the RE320.

For applications that either exhibit their own proximity effect, or where the source distance is constantly changing, this mic is worthy of consideration. Not that I recommend tight miking a string section, but sometimes circumstances force on us less than ideal positions. This mic might prevent some of the booming that Cellos tend to exhibit up close. Or perhaps it could provide a little sonic discipline to that guitar cabinet that just won’t behave.

And of course, one of the most complex instruments to record: The human voice! The 320 handles plosives very well, even without a 1/2″ of foam windscreen. This ability, in combination with minimizing the proximity effect, is exactly what an on-air studio demands – making the RE320 an ideal mic for live voice.

Electro-Voice has continued the heritage of the RE20/RE27 with the RE320. It is a microphone that can perform, in some ways, like no other. For general purpose fidelity and sensitivity, high-output, large capsule condenser microphones are hard to beat. But to properly use and protect them, you need a great degree of control over the myriad of variables within the studio. When that control is not possible, or when it comes to needing a durable mic that can withstand the harsh environment of close miking from a variety of sources, the RE320 is an excellent choice. It’s low-end is stunningly consistent. For the many applications where proximity to the microphone can change, this microphone can save the day!

Editor’s note: Field Reports are an exclusive Radio magazine feature for radio broadcasters. Each report is prepared by well-qualified staff at a radio station, production facility or consulting company.

These reports are performed by the industry, for the industry. Manufacturer support is limited to providing loan equipment and to aiding the author if requested.

It is the responsibility of Radio magazine to publish the results of any device tested, positive or negative. No report should be considered an endorsement or disapproval by Radio magazine. RE20 Has the New Black for Electro-Voice 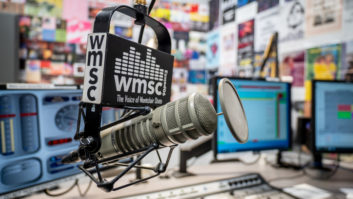 Jayaraman Takes Over Comms for Electro-Voice