The Alto Adige/South Tyrol region of northern Italy now boasts one of the most advanced radio facilities in Europe.

The new Funkhaus studios occupy the top two floors of a modern building overlooking the river Isarco in Bolzano. Transmissions originating from the complex reach 80 percent of listeners in the region.

Funkhaus hosts two of the main regional broadcasters, Südtirol1 and Radio Tirol, plus the RMI news agency, which provides German-language news to all radio stations operating in the region.

About three years ago, following the acquisition of two radio stations, it became necessary to gather RMI, Südtirol1 and Radio Tirol into a single location that was modern, functional and efficient.

The choice fell on a long-time acquaintance, Feel Communications in Padova, Italy. I am a product specialist for the company.

Having found the right building, Feel contributed to the planning phase, working with Funkhaus and Bolzano-based architects Planwerkstadt.

“At the same time we very much wanted to create a workplace that was both highly technological and a pleasant to work in, one that was conducive to communications and interaction, contact among the various departments.”

The creation of Funkhaus proceeded through soundproofing, the installation of technical equipment, wiring, systems planning and training to the handing over of the keys to this gem of modern technology.

Choosing the right technological platform was no easy task. Traditional wiring or audio over the Ethernet IT network? There were legitimate doubts over the use in a professional context of a platform considered by all involved to be a PC-type solution.

Given such doubts, a delegation — Marino Vanuzzo from Feel and Karl Kleinrubatscher, Heiner Feuer and Markus Steiner Ender from Funkhaus — traveled to the United States to see some of the Axia Audio IP-based solutions adopted by stations in New York and Houston.

The basic requirements were clear and simple: a modern system, flexible, easily expandable and good value for money. In operational terms, the three radio operations at Funkhaus, despite being independent, would have to work together.

RMI wanted to minimize production times and to deliver high-quality, broadcast-ready content in almost real time, without having to compress files for transmission across the Internet.

The Axia Audio system was able to assure the desired flexibility and powerful structure, while simultaneously capable of handling 500 uncompressed digital stereo streams with latency of less than 3 ms over an Ethernet network.

The flexibility of the digital matrix allowed Funkhaus to make changes to the structure and initial project during the installation.

The result was the biggest, most complex Axia Livewire system in Europe — and one of the biggest in the world — with 18 Element mixers, 34 workstations without sound cards and linked directly to the Axia network via Livewire, 25 microphone nodes and three 12-line Telos Nx12 hybrids with “only” nine I/O audio nodes for the entire system.

The setup has been in trouble-free operation at the Funkhaus for many months.

“What makes the Funkhaus installation different from the bigger U.S. installations we visited,” said Funkhaus Technical Director Markus Steiner Ender, “is that ours is the first to be totally networked, with all the sources instantaneously available everywhere and audio source sharing programs throughout the studios.”

“The other big systems,” said Steiner Ender, “are configured as lots of local studios sharing some sources through a central matrix, but not all of them.”

The control rooms of both the radio stations and RMI are networked and simultaneously share about 480 audio sources, using Cat7 cabling for the rack room and Cat6 for the links.

Conducting this “orchestra” is Axia Livewire, a seemingly clean and stylish way of moving audio via an Ethernet network. Livewire is based on three IP strategies, well-tested by large IT networks.

First, there is the use of Ethernet Layer 3 and multicasting. Packets converge in critical-application Cisco switching units to be forwarded only to devices enabled for the specific stream. This streamlines network traffic, prevents packet collisions and optimizes bandwidth usage.

Second, prioritization gives audio packets precedence over other types of information that share the same network.

Third, the drastic reduction in packet size, with clock data ensuring precise timing, makes it possible to limit the buffer within individual nodes and achieve latency of 3 ms anywhere in the network.

Axia has not reinvented the wheel, but it has simply kept things as simple as possible and integrated technologies already well proven in non-audio environments.

The system, thanks to the programmability of GPIOs, manages external signals for the on-air/microphone-live LEDs on the mic stand and a light that shows green for a phone call: red for on air; yellow for a traffic announcement; blue for an emergency message.

PCs are located in a rack room with an Avocent keyboard-video-mouse (KVM) switching system, while each studio has a PMC audio monitor, three or four 37-inch TV LCD monitors and up to seven PC monitors.

On the subject of telephone hybrids, Funkhaus was the first broadcast facility to connect Telos Nx12 hybrids directly via Livewire, thus fully integrating them with the Axia system.

From any mixer, by pushing the “phone” key on the mixer channel to get a line, the user can dial any number directly on the monitor.

At Funkhaus, all mixers can access all audio sources. There are, however, some subsystems that have access limited to individual PCs, microphones, tuners of the three Funkhaus operations and the telephone hybrids. The on-air mixers can only access the audio channels of their own specific entity.

Other sources, however, are fully shared — the conference room is available to more than one studio and the three Telos Nx12s make 36 telephone channels available to all the mixers.

Monitoring in the on-air studios is by means of innovative PMC Wafer Series installation speakers, while the production studios use PMC AML1 powered speakers.

All of the audio channels of the Funkhaus are accessible from the management offices and the rack rooms, where Axia Audio Router Selector Nodes enable monitoring of everything available on the Livewire network.

Working along with the Axia System to keep things working smoothly at the Funkhouse is a DAVID Systems automation solution.

“Choosing the automation system was not easy either,” said Steiner Ender. “The criteria were again obvious and simple, but not easy to find in a single software application.”

According to Steiner Ender, Funkhaus needed system stability, versatility, scalability, simplicity of use and a great capability for interfacing with other software.

“There were a lot of solutions available, some of them really valid, but none of them, except for the DAVID system, able to meet the criteria 100 percent,” said Steiner Ender.

The DigaSystem Database Manager, central to the DAVID system, allows users to view, prelisten, organize, rename and edit the elements stored in the system. It is thus possible to manage all of the content — music, ads and so on — in a single database.

Additionally, even though it is an open system, security is not a problem. The DAVID solution is built from independent, interfaced components, making the structure scalable while allowing for sharing of data.

The DAVID strongpoint, like that of the Axia system, is its configurability. There are no default limits. All users can set up their own screen and functions, and create a profile containing access rights for each specific function, area or database content.

A moral of this story is certainly that the success of a broadcast network relies on system versatility, the maximization of return on investment and, above all, a willingness to embrace new ideas while also ensuring the type of security that is often hard to find in the IT world.

RW welcomes suggestions for projects and facilities to profile. Write to [email protected] 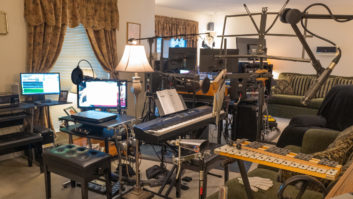 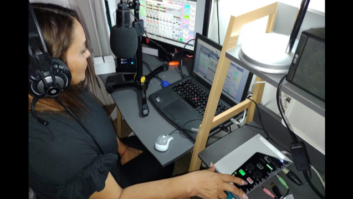