A new study by Nielsen marks the first time the company has captured and examined all AM/FM radio streaming behavior by listeners across the U.S.

Additional insights on the data, from an analysis completed by the Cumulus Media | Westwood One Audio Active Group, included data from Edison Research’s quarterly Share of Ear study as well as purchase intention data from MRI-Simmons, a consumer insight firm.

The results on the streaming of AM/FM stations may come as a bit of a surprise, said Suzanne Grimes, president of Westwood One and executive vice president of marketing for Cumulus Media.

The study examined several key metrics that are of use to stations, marketers, media planners and buyers, including a detailed look at how much listening happens in home DMA markets and an analysis of advertising consumption among other areas.

To start, the study revealed that the number of listeners to radio streams is growing, with streaming representing 12% of total AM/FM radio listening of individuals aged 25-54. That’s up from 9.2% in August 2021.

There is also growing demand for spoken-word streams, which include news, talk and sports programming — so much so that 36% of all time spent streaming is spent listening to spoken-word stations.

For some AM/FM radio programming formats, streaming represents 25% to 30% of all listening. The figures break down in the following ways:

In compelling news for marketers and ad buyers, the Nielsen report also revealed that the majority of an AM/FM radio streaming audience resides in the home DMA market. An analysis of 321 AM/FM radio station streams by Nielsen revealed that 89% of streaming audiences came from home market stations. “Marketers can purchase time on AM/FM radio station streams knowing most of the audience is from that home market,” said Pierre Bouvard, chief insights officer at Cumulus Media | Westwood One and president of the company’s Audio Active Group. Cumulus’ Bouvard also incorporated findings from a 2021 MRI-Simmons survey and found that audiences that had listened to AM/FM radio station streams in the last 30 days are more likely than the average listener to make a series of major purchases, such as buying a new vehicle, buying large household furnishings or starting a new business.

The Nielsen study also revealed that fewer ads are needed in AM/FM radio streams because those streamed ads are being listened to more often and with a greater level of frequency when compared to ads broadcast over the air. According to the analysis by Bouvard, “half the number of streaming ads are needed to achieve the same level of frequency over the air,” he wrote. “Given the strong streaming time spent, it is no surprise that streaming campaigns reach larger proportions of audiences faster compared to over-the-air campaigns.”

But the report also revealed that there is wide variation in the amount of AM/FM radio stream listening in one market compared to another. In Las Vegas, for example, only 3.9% of all AM/FM radio listening occurs via the stream. That’s compared to an 18.4% average in Philadelphia. The top five cities on Nielsen’s list include Philadelphia; the Providence/Warwick/Pawtucket, R.I., market; Washington, D.C.; Minneapolis/St. Paul; and Baltimore.

The bottom five: Las Vegas, Detroit, Jacksonville, Dallas/Ft. Worth and, interestingly, Pittsburgh, Pa., which is only a few hundred miles away from the leading market city of Philadelphia.

The analysis by Cumulus also included data from Edison’s Share of Ear report, which found that the ad-supported share of AM/FM radio streaming has increased 6% to 11% with ad-supported programming at Pandora dropping from 10% in 2017 to 8% in 2022.

On top of that, the Share of Ear study revealed that streaming is growing as a percentage of total AM/FM radio listening. While over-the-air radio listening continues to dominate, more listeners are tuning in to digital streaming of AM/FM radio. In the first quarter of 2022, 15% of those surveyed say they are listening via a stream, up from only 8% in the fourth quarter of 2016.

In terms of future reports, broadcasters in Nielsen’s PPM markets can elect to have their online streams reported separately or combined with their over-the-air audiences via total line reporting.

Susan Ashworth is the former editor of TV Technology and a long-time contributor to Radio World. She has served as editor-in-chief of two housing finance magazines and written about topics as varied as broadcasting, education, chess, music, sports and the connected home environment. 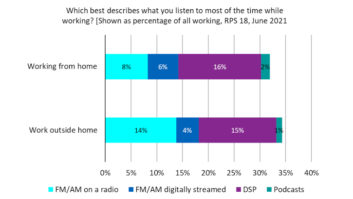