Bloomberg Radio is a 24-hour business information network that provides news and information to a global audience, employing a full-time staff of 40+ anchors, producers and reporters. It combines the power of Bloomberg News (with 2,700 journalists and analysts in more than 120 countries) with the data and analytics of the Bloomberg Terminal business research and information network, giving listeners conversation and up-to-the-minute analysis of world events and its impact on markets.

Bloomberg Radio is heard on five flagship stations, in New York, Boston, San Francisco, Washington and an international outlet in London. It can also be heard nationally via Sirius/XM Channel 119, and internationally via Bloomberg Business, iHeartRadio, on TuneIn apps and at Bloombergradio.com. The syndication arm of Bloomberg Radio provides short-form updates to 300+ affiliate radio stations across the country and reaches 27 million listeners weekly.

Originally located at 499 Park Ave. in New York, Bloomberg Radio went live from its 731 Lexington Ave. facility in 2005, serving WBBR in New York as well as both Sirius and XM (prior to their merger). The building was designed by Cesar Pelli and serves as the global headquarters and Americas Media Center. Radio is only part of what goes on at 731 Lex; 12 regional television distributions with digital streaming and video on demand, feeding the Bloomberg Terminal customers, Bloomberg.com, syndication partners along with the global TicToc news network emanate from there as well. 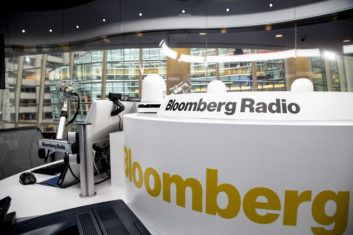 The flagship studio for Bloomberg Radio was designed by award-winning director Roger Goodman, in collaboration with radio programming and technology teams. According to Bloomberg it was designed to enable a streamlined and seamless operation supporting natural conversations in the space with all technology elements available to enable the journalist to cover stories and provide for simulcast in audio and video distributions without traditional overhead.

I asked Bloomberg Global Radio Manager Anthony Mancini if there were any difficulties in the design. “The biggest challenge was thinking about radio differently. Where is the medium going? What haven’t we done yet? What is new and exciting that we can do that this space can help us achieve?” he told me. “In the end the push by our technology team and designers helped create a space unique to radio but still fitting the mold and culture of Bloomberg.

“The collaboration between the technology team and Roger was extensive — we were in lockstep the entire way. Taking key elements of how radio relies on eye contact and anchor synergies to make a great program gave the designers a solid foundation and starting point for the space. In addition, the studio’s prominent location inside of Bloomberg’s global headquarters allowed designers to not only build a studio but a show piece for the entire company to be proud of,” said Mancini.

The broadcast environment was built through integration of IP audio-based technology, such as the Wheatstone LXE console, in-house systems and automation, to provide for streamlined operations and access to the company’s 120+ bureaus around the world. Specifically, custom-built furniture components were created with the need to maintain clear eye contact for in-studio talent and guests and provide clean visuals without the talent needing to worry about looking toward the camera.

Bloomberg Radio includes a strong visual aspect, so I asked Mancini about those design aspects as well. Were furniture design requirements specified so that the “studio” looks more and more like a TV “set”?

“Design requirements were set to create an environment that enabled comfortable conversation and helped to convey the energy of the show,” said Mancini.

“By allowing the talent and guests to have a natural conversation with all furniture and equipment in place to support the conversation they are able to look at each other as you would normally and have the Bloomberg Terminal for information source in camera shots that look clean as well. The main design premise was not to focus on the platform (video or audio) but to enable the show story-telling and reporting capabilities with audio and visual tools for multi-platform distribution.

“We specified microphones and booms that were low-profile and side-mounted to allow clear eye contact for all contributors and captured their shots without having a boom obstruct their face. Heil microphones are used for the profile and sound quality,” he said.

Lighting wasn’t nearly as important in an older radio studio as it is now, at least considering visual radio, and I asked Mancini about that. What type of lighting is used? “Unlike more traditional sets we selected low-footprint LED lighting to enable it to be seamlessly merged with the architecture and aesthetics of the space. Since all the lighting is LED-based the heat-loads and power loads are minimized versus what would be in a traditional studio,” he answered.

Camera selection is an important design aspect. “Cameras chosen were of the Panasonic AW-HE series for low-profile form factor and aesthetic blending into the sets,” said Mancini. Roman Mackiewicz, Bloomberg Media’s chief information officer, said, “Cameras are set up for each talent/guest position so that it is pre-framed to allow for whoever is speaking during the show to be taken to air without requiring camera physical movement or much adjustment to centering of speaker. Camera position and furniture is aligned to enable person speaking to not look into camera to have a good ‘iso/single’ eye contact with camera while on air.”

I asked if camera switching is done by a person or in an automated fashion. “There is an automated switching control program used (in-house, custom) that provides safe shots in standard programming formats and all camera controls, including painting and shading control,” Mancini said.

“This automation allows us to switch between cameras, without framing adjustment, while the show is happening, showing the space and talent/guest relationship in a naturally framed setup,” said Mackiewicz. “All cameras are available to be used from any control room in the 731 facility, including video distribution, pan, tilt, zoom and color correction/iris control. Camera footage is available live to all production control room for viewing, camera control is selected and ‘taken’ by the control room doing show production at the time.”

The Bloomberg Radio studio was built from the start to supply audio as well as video content to radio and TV audiences alike. If you anticipate building a studio for one or more of your radio stations now, plan for the video aspects at the beginning, along with the audio aspects. Trying to go back later to “tack on” or change physical features to better accommodate visual radio doesn’t really make any sense after the fact.

Thanks to Anthony Mancini, Roman Mackiewicz and Brittany Baker of Bloomberg for assistance in preparation of this article.